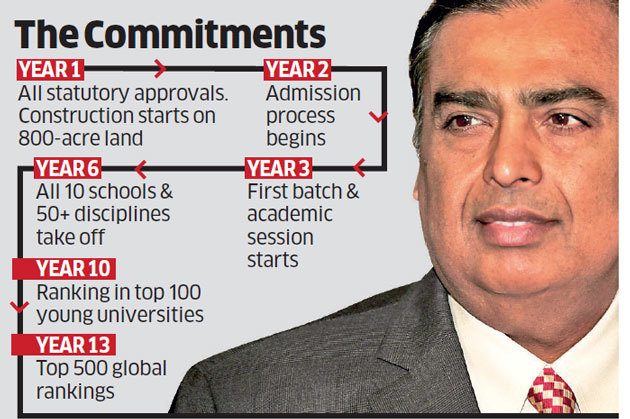 Reliance Industries chairman and managing director Mukesh Ambani led the team that convinced the government committee to pick the Reliance Foundation’s proposed Jio Institute as one of the country’s six Institutes of Eminence (IoE).
Among those at his side was education adviser Vinay Sheel Oberoi, formerly secretary at the human resource development ministry. He was part of the eight-member Jio team that made its presentation before the empowered expert committee chaired by ex-chief election commissioner N Gopalaswami.
However, Ambani was so well-versed with all aspects of the institute that he single-handedly fielded all the committee’s questions, said people with knowledge of the matter. The university is said to be one of Ambani’s dream projects. It is learnt that he had made a similar proposal to the previous government.

Oberoi was secretary, higher education, at HRD ministry in 2016 when the IoE scheme, then called the World Class Institutes programme, was announced in the Union budget.
The finer points of the plan were discussed through 2016 with considerable back and forth between the ministry and the Prime Minister’s Office (PMO).

However, the Institute of Eminence regulations were only announced in September 2017, after Oberoi had retired in February that year. The EEC was set up in February this year and the first presentations began in April.
However, ET was unable to ascertain the exact date of Jio team’s presentation.
Indian Administrative Service (IAS) officers have to take a break, or cooling-off period, of a year after retirement from government before taking up any commercial job offers.Oberoi, a 1979 batch IAS officer, appears to have satisfied that condition and is gathered to have started his association with Reliance after March 2018.
Reliance didn’t respond to ET’s queries. Oberoi didn’t respond to calls and messages on his association with the Jio team.
Reliance had applied under the greenfield category for the Jio Institute that’s to be set up on an 800-acre campus in Karjat in Maharashtra and was the only to have been picked in that classification.
Proposals by VedantaNSE -2.89 %, Bharti AirtelNSE -1.45 % and Krea Foundation were among those in the fray in the category. Jio’s presentation, seen by ET, focused on the Reliance group’s transformational impact” on key sectors in India, its focus and spending on research to the tune of Rs 6,000 crore in the past five years, its relationship with the top 50 global universities.

It also cited its experience in the field of education, pointing to the Dhirubhai Ambani International School, 13 Reliance Foundation Schools that have 13,000 students, the Dhirubhai Ambani Institute of Information and Communication Technology, the Pandit Deendayal Petroleum University and Mukesh Amabni’s own association with the Indian Institute of Management, Bangalore (he was chairman).

The EEC report, also accessed by ET, said 11greenfield proposals had been considered but “very few of them (were) breaking new ground.” The report noted that some appeared to want the status so they could leverage it. Others had weak financial standing and in one case the land identified was under prolonged litigation.

“Of all proposals, EEC found only one which appeared well thought out, well presented and taking an impressive multi-decade view of institution building leveraging that promoter group’s known competencies in infrastructure building and the timely creation of new ventures,” the report said.

“EEC found only that proposal created confidence of the new institution meeting the rather stiff goal of being within the 500 of world rankings in a period of 10 years and therefore recommended it.”

The EEC also observed that since there are no achievements by which to assess a greenfield institution, it had to assess potential on the basis of information relating to the promoter group, its financial standing, commitment of finances and infrastructure for new projects besides leadership reputation and thus arrive at the “soundness of the proposal and the chances of it achieving the desired IoE goals.”

The five others that were chosen as Institutes of Eminence are schools of long standing—IIT Delhi; IIT-Bombay; IISc Bengaluru; BITS Pilani; and Manipal Academy of Higher Education.